Tumor growth is mediated by several factors including metabolic function, intracellular signaling, evasion of apoptosis, tissue invasion and metastasis, and angiogenesis. Of these factors, angiogenesis is a crucial component due to its part in both delivering nutrients and providing a conduit for metastasis. Current anti-angiogenic therapies focus on tumor-derived VEGF signaling; however, these efforts are modest and prone to resistance by upregulation of other pro-angiogenic signaling (1,2). Due to incomplete knowledge of endothelial cell (EC) biology, other methods of impeding tumor angiogenesis are not available.

In their previous work, this lab has established that miR-200b plays a role in inhibiting metastasis through blocking tumor angiogenesis (3). Although the molecular mechanisms behind this finding are not well characterized yet, it provides a potential alternative pathway to target vascular sprouting in cancers. Azam et al. performed integrated bioinformatic analyses on several highly angiogenic cancer types via The Cancer Genome Atlas (TCGA) as well as ECs transfected with miR-200 to identify genes with an inverse correlation to levels of miR-200 (4). Then they filtered genes with endothelial relevance, which led them to tease out Quaking (QKI) as a protein with possible involvement in tumor EC proliferation. Further investigation of patient samples have identified the presence of QKI in tumor angiogenesis, where its expression corresponded to poor prognosis and higher levels of vascular sprouting.

Although not much is known about its involvement in the context of tumor angiogenesis, QKI plays a critical part in embryologic angiogenesis and normal vascular function (5). It is a highly conserved gene with three alternatively spliced isoforms (-5, -6, and -7) that are all sensitive to expression of miR-200b in tumor EC. Results from this article reveal that miR-200b binds to a conserved 3’ UTR of QKI mRNA, which subsequently downregulates protein expression. This finding was confirmed with Argonaute 2 immunoprecipitation, where all three mRNA isoforms were bound to an RNA-induced silencing complex in miR-200b transfected ECs compared to negative control miR-transfected ECs. Although its role in tumor angiogenesis was previously unknown, Azam et al. were able to ascertain that QKI stabilizes cyclin D1 (CCND1) mRNA during cell cycle transition from G1 to S phase during EC proliferation (4). Azam et al. were able to use this knowledge to identify a miR-200b/QKI/CCND1 axis through which tumor angiogenesis can be targeted for therapeutic inhibition of metastasis (Figure 1). 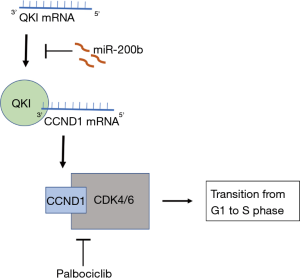 In vitro studies show that downregulation of QKI via miR-200b regulation reduces the number of vessels sprouted during a bead assay of angiogenesis (4). Silencing QKI expression with siRNA reproduced the effects of miR-200b, which demonstrated the correlation between QKI and vascular sprouting. To further investigate the mechanism of QKI on EC proliferation, Azam et al. performed RNA sequencing of ECs after QKI silencing and discovered that many of the downregulated mRNAs were those involved in cell cycle regulation. They confirmed QKI’s role in the cell cycle by synchronizing EC through serum starvation and observing an arrest in G1 in QKI knockdown cells. QKI overexpression was able to rescue cell cycle progression in ECs that were inhibited with miR-200b. Through these experiments, they classified QKI mediation of cell cycle as an important mechanism of angiogenesis, and identified miR-200b’s role in suppressing EC proliferation through QKI downregulation.

From determining cell cycle regulation as the major effector of QKI on angiogenesis, Azam et al. continued their investigation by pinpointing the molecular mechanism. They identified candidates by assessing which mRNA sequences are most downregulated by QKI silencing via qPCR. Their results indicate that CCND1 was most potently affected by both siRNA and miR-200b silencing of QKI. These data were corroborated with decreased CCND1 protein expression with QKI silencing as well. In order to assess the interaction between QKI and the CCND1 mRNA, Azam et al. performed an RNA immunoprecipitation and found that QKI binds to its 3’ UTR. Furthermore, there are no QKI response elements found in the introns of CCND1 mRNA, suggesting that QKI is not involved in alternative splicing. QKI appears to play a more important role in regulating stability, given that CCND1 mRNA degradation was accelerated in QKI silenced ECs. All three isoforms appear to be necessary since silencing of each isoform resulted in some decrease in CCND1 protein expression. These findings demonstrated that QKI plays a major role in stabilizing CCND1 mRNA, which mediates G1 to S phase transition during EC proliferation.

To complete their hypothesis that the miR-200b/QKI/CCND1 axis in the regulatory component of angiogenesis and EC function, Azam et al. manipulated CCND1 levels to observe the effects on EC proliferation. They overexpressed CCND1 in QKI silenced ECs and found that EC proliferation function was rescued, which suggests that QKI largely doesn’t have any other effects on EC growth. Next, they pharmacologically inhibited CCND1 function with an FDA-approved drug, palbociclib, which inhibits the CDK4/6-cyclin D complex. The results resembled a decrease in EC proliferation as seen in miR-200b transfection or QKI silencing with siRNAs.

Angiogenesis and metastasis are amongst the hallmarks of cancer that are the most challenging to treat. Therapies targeting angiogenesis mainly focus on VEGF since little is known about EC biology in the context of cancer. Here, Azam et al. were able to characterize a pathway that can offer an alternate method of treatment. Identifying QKI as a stabilizer of CCND1 mRNA in mediating EC proliferation reveals that CDK4/6 can be a target to slow down angiogenesis and reduce tumor growth. This finding was corroborated by repurposing palbociclib, which is a drug used to treat HR+ HER2− breast cancer. Treatment with this drug mimicked the results of miR-200b expression and QKI silencing, indicating its relation in the pathway. Though shedding light on a portion of tumor EC biology is a significant discovery for therapeutic reasons, the authors admitted that QKI-mediated promotion of angiogenesis is likely more complicated and extensive. QKI has an unusually long 3’ UTR and its other mRNA targets will need to be determined in order to have a clearer picture of the molecular mechanisms. They also note that QKI silencing probably has other off-target effects that contributed to decreased metastasis, which allows for a pipeline of other future endeavors to understand its role in cancer biology such as how it affects tumor microenvironment.