The lung is a much-branched organ consists of heterogeneous lineages of cells derived from both endoderm and mesoderm (1,2). Lung epithelial progenitor cells are orchestrated with endothelial and mesenchymal cells in a complicated manner to maintain the homeostasis of lung epithelium. In embryonic stage, the lung is developing from a mass of progenitors in the ventral part of the anterior foregut (3). However, the developmental potential of progenitors in lung diminishes along with the growing (4). In adult lung, no evidence supports the existence of cells which are able to differentiate to all subpopulations in proximal and distal airway epithelium. Instead, multiple local epithelial cells, including club cells (Clara cells), basal cells, ciliated cells, bronchoalveolar stem cells (BASC), and alveolar type II (AT2) cells are considered as progenitor cells responding to regeneration and repair (5,6). BASC cells were first identified by Kim and colleagues in 2005 (7). However, the classification and function have not been well defined, particularly in human lungs. BASCs have been grouped as a subpopulation of club cells and have potential to become AT2 cells (7,8). It has long been believed that the epithelium in the conducting airways and in the gas-exchanging alveoli is derived from distinct lineages of stem cells in adult lung. Whether there is a subpopulation of progenitor cells could generate both airway and alveolar epithelium has not been completely understood.

Contributions of this paper

Liu et al.’s in vivo study for the first time verified the dual pluripotential role of BASCs for epithelial homeostasis and injury repair in the airway and the lung, by tracing the descent of CC10 (also CCSP, Scgb1a1, a maker for Clara cells) and Sftpc (also SPC, a marker for AT2 cells) dual positive cells rigorously (9). Of note, this eminent paper visibly confirmed the novel origin of both club cells and AT2 cells in their own niches. In homeostatic lung, BASCs contribute very less to constituting but considerably to maintaining the population of lung epithelial cells, and this has not been noticed before (9). On the average, less than one BASC exists in a bronchioalveolar duct junction (BADJ) (10). The authors explored the mechanisms for the repair in case of ablation of either naphthalene-sensitive club cells or bleomycin-injured AT1 cells (Figure 1). The BASCs underwent a stage of proliferation before they differentiated into club cells or AT2 cells in response to injury, as evidenced by the EdU assay (9). This may explain the swell of CC10+Sftpc+ population in murine lung cancer models (11), and the existence of CC10+Sftpc+ dual-positive cuboidal cells in the terminal bronchioles and CC10+ lineage-labeled cells, which may help the regeneration of AT2 cells in injured lungs (12). In addition to circulating stem cells (13), BASCs could play an even more important role in lung regeneration after catastrophic-induced lung injury. 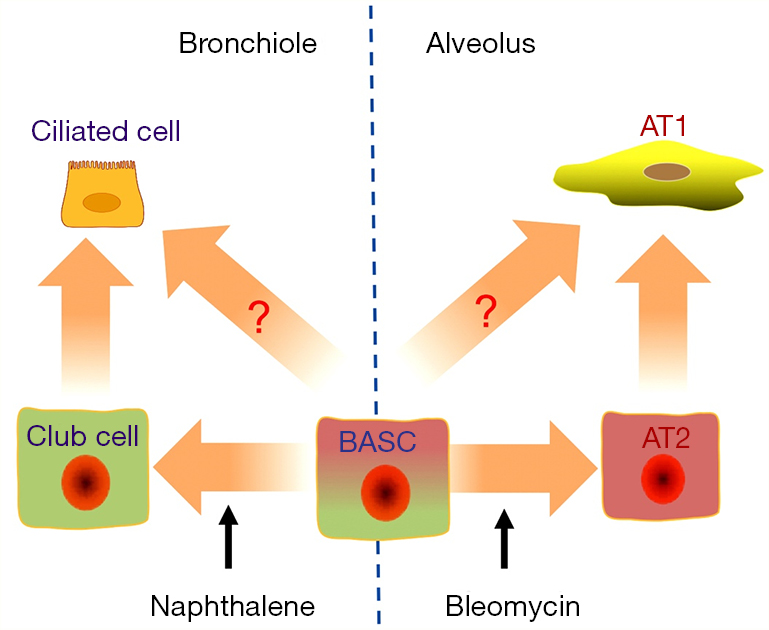 Figure 1 The dual linages of BASCs. The BASCs, which located at the adjacent regions of bronchioles and alveoli, could differentiate into bronchial and alveolar cell lineages during homeostatic conditions or post injury. When mouse club cells were depleted by naphthalene, the naphthalene-resistant BASCs contribute to the regeneration of bronchiole by differentiating club cells and ciliated airway epithelial cells. When type 1 alveolar cells (AT1) were damaged by bleomycin, BASCs act as a source of alveolar epithelial cells as well. However, whether BASCs differentiate into ciliated (or AT1) cells directly is uncertain. BASC, bronchoalveolar stem cell.

The complexity of stem cell linages in adult lungs is presumably much more than what has been already thought. The authors identified several branched clusters of two sub-populations of BASCs for the first time using the single-cell RNA sequencing combined with the state of the art bioinformatic assays (9). The turnover of adult lung in homeostasis situation is at a very low level, but the regeneration after injury which usually consists of the activation of progenitor cells and proliferation of remaining cells could occur rapidly (14). The characteristics of BASCs reported by Liu et al. (9) also fit the scenarios. Not only the “daughter” cells in adult lung could be contributed by multiple cell populations, the differentiated cells may re-enter cell cycle via dedifferentiation during lung regeneration. Different clusters of cells may transdifferentiate into each other responding to dynastic niches (2,15). The AT2 cells could be descended from Sftpc− progenitors (12) or even AT1 cells, which are commonly considered as differentiated somatic cells derived from AT2 cells (15). Similarly in the airways, basal cells, club cells and goblet cells may be capable of transdifferentiating into each other (16). Although BASCs were divided into two groups due to their gene expression profile, some cells in either sub-group could differentiate into either club or AT2 cells (9). The relationship of these two sub-populations and the numerous and branched clusters of the subpopulations is waiting to be determined in detail in the future.

The duality of BASCs may relate to their geometric location (Figure 1). The cells arranged along the airways and alveoli basically contribute to the cell population of their own depth. In proximal airway, submucosal gland duct stem cells, basal cells and club cells give rise to goblet cells, ciliated cells, serous cell and even myoepithelial cells. In distal airway, both BASCs and neuroendocrine cells might contribute to the population of club cells, which would self-renew and differentiate into ciliated cells. In alveoli, AT2 cells descending from BASCs or DASCs or Itgα6β4+ cells are well described as a population of stem cells (2,16). In the lung, intercartellagenous regions of tracheobronchial airways, neuroepithelial bodies in bronchioles, and BADJs are three typical niches which support submucosal gland duct stem cells, club-like stem (also variant club subpopulation) cells (17) and BASCs, respectively (13,18). In proximal airways, basal cells could differentiate into club cells and ciliated cells, and serve as niches for club cells (19). In alveoli, AT2 cells are adjoined by lipofibroblasts which express Fgf10 (16). Blood vessels are found in mouse BADJs (20). Moreover, the lung endothelial cells could be essential to maintain the properties of BASCs, including the lineaging potential to CC10+ cells and Sftpc+ cells and dual positive cells (8). In response to the injury induced by naphthalene or bleomycin, BMP4-NFATc1-thrombospondin-1 axis plays a critical role in regulating BASCs to differentiate into club cells and AT2 cells (8). Obviously, Liu et al.’s work could pave a path for discovering potential role of Lrg1+ BASCs in angiogenesis (9).

Given the confirmative properties revealed by Liu et al. (9), BASCs could be a new target for curing lung injury. A previous group suggested the significance of BASCs in the progression of fibrosis (13). For the Plin2 gene, which is a biomarker of lung adenocarcinoma are also upregulated in BASCs compare with club cells and AT2 cells (9), the lost control of BASCs may be a pathogenic clue for lung cancer. So far, the features of BASCs in human lung have not been characterized (15). Furthermore, notwithstanding resistance to many noxious factors, BASCs were almost depleted as well by bleomycin (13). How the pool of BASCs gets replenished under these experimental conditions and if this is the case in injured human lungs remains elusive. The inactivation of Abl kinases could motivate the expansion of BASCs after injury (21). Similar to BASCs, the cells such as p63+Krt5+ cells (22,23), Itgα6β4+ cells (24) or “variant” club cells (20) are not dominant but may be a key player in lung epithelial regeneration under specific conditions. How differentiated cells feedbackly regulate the renewal of BASCs is still an open question.

This work was supported by institutional funds.