Liver injury is a serious condition which may often lead to hepatic failure. It can occur as a consequence of insults and toxicity related to viral hepatitis, drugs, ischemia, alcohol, drugs, metabolic diseases or autoimmune disease. Liver transplantation may be required in cases of acute or fulminant liver failure beyond the capacity of the liver to repair and regenerate. While this is an effective treatment option, the scarcity of organ donors, and the medical, financial and socioeconomic factors limit its utility. New approaches to ameliorate liver injury are needed.

The use of mesenchymal stem cell (MSC) based therapy is a promising new strategy for the treatment of organ injury, and one that may have applications for acute hepatic injury (1-3). MSC have several unique properties such as their inherent capacity for regeneration and multipotency that support their use for tissue replacement therapy. Infusion of MSC can improve liver function in acute hepatic failure and bone marrow derived MSCs have been reported to exert both immunoregulatory and anti-apoptotic effects. Nevertheless, there are several limitations to their use. These include the cost, time required for their generation, and the need for a consistent supply of cells with a stable phenotype (4). Other limitations include toxicity, loss of viability, rejection or unwanted engraftment, for example, within the pulmonary microvasculature after their systemic administration (3).

In several experimental reports, some of the observed effects of MSCs have been mimicked through the use of conditioned media released by these cells. These paracrine effects can be mediated by secreted proteins such as growth factors and cytokines or the release of membrane bound extracellular vesicles (EV). Recent studies have highlighted the involvement of EV, endogenous membrane-bound cellular nanoparticles released from cells, as a mediator of intercellular communication, and in maintenance of tissue homeostasis. EV released from cells can be taken up by other cells, with transfer of their cargo which can include proteins, lipids, RNA or DNA (2). These EV can include several different types of particles such as exosomes, microvesicles, apoptotic bodies and others.

These different types of EV vary in their biogenesis, and their content may be variable. EV have been postulated to contribute to many physiological and pathological processes such as cancer progression, immune modulation, neurodegenerative diseases, or tissue regeneration (1,2,7,8). EV released from stem cells have been shown to modulate angiogenesis, prevent apoptosis or promote cell proliferation. These EVs are enriched in RNAs and proteins that are involved in altering the cellular environment including tissue repair (8-10). Transfer of EV and their content can occur by membrane fusion, endocytosis or receptor binding. Exosomes are a specific type of EV, ranging in size from ~40–100 nm. Exosomal cargo depends on the origin of the cell type, as the content is derived from the parent cell packaging machinery and gets integrated within the cargo (11). MSC derived exosomes have been reported to transfer proteins and microRNAs that can repair tissue injury (12).

In a recent article, Xu and co-workers examined the effect of human umbilical cord mesenchymal stem cell derived exosomes (hucMSC-Ex) on hepatic injury using both in vivo and in vitro models (1). They showed that hucMSC-Ex could protect against hydrogen peroxide (H2O2) induced cell death, and in liver injury in mice induced by administering carbon tetrachloride (CCl4) (13,14). Hepatotoxicity by CCl4 follows activation by the CYP450-dependent mono-oxygenase system that in turn generates reactive free radicals that can induce oxidative damage to cellular constituents. Amongst these are lipid peroxidation as well as formation of adducts.

After administering hucMSC-Ex in vivo, there was a decrease in markers of hepatic injury namely alanine and aspartate aminotransferases. A decrease of several pro-inflammatory cytokines such as G-CSF, interleukin-1α, interleukin-6, monocyte chemo-attractant protein-1 and tumor necrosis factor (TNF)-α were also observed, along with reduction in 8-OHdG and TUNEL positive cells and a decrease in markers of lipid peroxidation such as malondialdehyde (MDA) in livers treated with hucMSC-Ex in comparison to PBS or control lung fibroblast exosomes. Consistently, hucMSC-Ex reduced reactive oxygen species and MDA in hepatocytes exposed to CCl4 and H2O2. Activity of an endogenous antioxidant glutathione peroxidase (GPX1) was increased in hepatocytes after exposure to hucMSC-Ex, and without a concomitant change in mRNA expression. GPX-1 expression in umbilical cord MSC or in hucMSC-Ex was higher than in lung fibroblasts or exosomes from these cells, and these differences may account for some of the variations in response observed.

In this study, EV isolated from umbilical cord MSC or from lung fibroblasts were designated as exosomes based on conventional size, ultrastructural morphology on electron microscopy, and expression of markers such as CD9, CD61 and CD63. However, the possibility remains that the isolations may not be completely homogeneous. The protein markers used, for example, can also be detected in other types of EVs such as microvesicles. Thus, it would be more accurate to designate these as EV. Indeed, other types of EV such as microvesicles that are released from MSC have been reported to have beneficial effects in other models of solid organ injury such as acute renal tubular injury or cardiac injury (1,15).

These findings are consistent with the observations reported by several groups showing beneficial protective effects of BM-MSC-EV on toxicant or cytokine-mediated hepatic injury or in hepatic ischemia-reperfusion injury in murine models. Haga et al. reported that the administration of EV isolated from bone marrow derived MSC dramatically improved survival and abrogated cytokine-mediated hepatic injury induced by systemic administration of D-galactosamine/TNF-α. A reduction in biochemical and histological hepatic injury, apoptosis and mortality from liver failure was observed (3). In another study carried out by the same group, a protective effect of BM-MSC-EV was observed with experimental hepatic ischemia/ reperfusion injury in vivo. The administration of MSC-EV in mice after 6-hours of reperfusion, reduced serum markers of hepatic injury, blood urea nitrogen and creatinine, and decreased caspase 3—positive cells (5). Similarly, Tan et al. have reported that MSC exosomes can attenuate CCl4 induced injury in mice, and enhance proliferative and regenerative responses (16). Although they reported that MSC exosomes could inhibit acetaminophen or hydrogen peroxide induced liver injury in vitro, they did not observe alterations in the mRNA expression of antioxidant genes. Although not directly addressed in these studies, the beneficial effects observed in these studies could therefore have been mediated by the direct transfer of hepatoprotective contents within exosomes rather than by modulation of target gene expression.

These observations suggest that MSC-EV play a role in delivering cargo that has reparative properties that facilitate cellular or tissue repair (Figure 1). The lack of response observed in studies using EV from non-MSC sources in each of the reports discussed above confirms that the cargo within EV from different sources can differ in content and the functional effect that they elicit. Transfer within EV of specific proteins such as GPX may directly contribute to detoxification and antioxidant effects. Likewise, other EV constituents such as their RNA or lipid content could also have functional effects in modulating injury. In cancer cells, release of specific RNA within EV has been linked to cell survival in the setting of hypoxia or chemotherapeutic stress (17-19). Thus, elucidating the differences in EV content between MSC-EV and those from other cells that do not have reparative effects is likely to yield insights regarding functionally active EV constituents that could be further exploited for therapeutic gain. 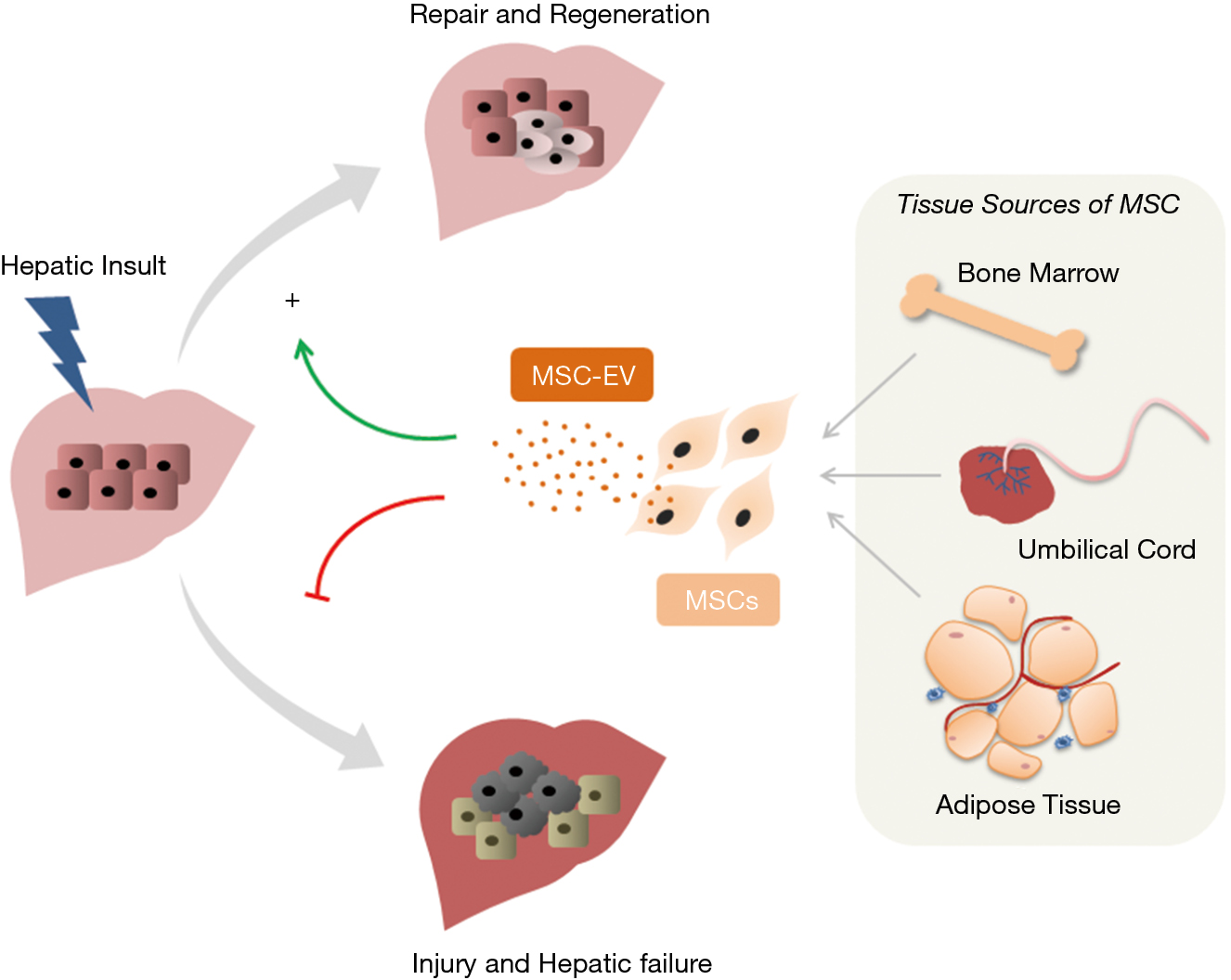 Figure 1 Mesenchymal stem cell (MSC) derived extracellular vesicles (EV) are a promising new therapeutic approach for liver injury. MSC can be obtained from diverse sources such as bone marrow, umbilical cord or adipose tissue. EV isolated from these MSC can promote tissue repair and ameliorate injury in the liver, for example through the transfer of biologically active protein or RNA contents.

MSC derived EV have several advantages over the use of MSC for therapeutic purposes (4). As a non-cell based therapy, MSC-EV have been expected to have lower immunogenicity, higher proliferative capacity and greater transfection efficiency (20,21). A particular advantage of the use of MSC-EV over MSC is they do not carry the risk of pathological differentiation of engrafted cells that can occur with latter. Other potential benefits include long- term storage stability, ease of being internalized into recipient cells, very low immune rejection, and convenience of administration (5,20). Along with the results of these emerging studies showing beneficial effects in different models of hepatic injury, these advantages provide the impetus for further characterization of MSC-EV towards their use as a novel therapeutic approach to ameliorate hepatic injury.

Funding: Research in the Patel lab is supported by the Office of the NIH Director Common Fund Program through the National Center for Advancing Translational Sciences (UH3 TR00884).