Cancer cells are remarkably flexible in their ability to adapt to various local environments to promote their survival, growth and invasion. A recent study by Koh’s laboratory suggests that metastatic cancer cells upregulate fatty acid oxidation (FAO) through activation of yes-associated protein (YAP), a major effector of the Hippo pathway, at local lymph nodes (LNs), which boosts the ability of the cancer cells to invade distant organs (1). We here discuss how YAP mediates the metabolic flexibility in metastatic cancer cells.

Cancer metastasis to the regional sentinel LNs, the most common site of metastasis of epithelial tumors, is one of the most important prognostic indicators for additional metastasis to other organs and mortality in cancer patients (2). Currently, there is no effective strategy for selectively targeting metastasis. Thus, a deeper understanding of the molecular mechanisms of the metastatic processes is essential.

Cancer cells initiate metastasis by entering the bloodstream, either directly or through the lymphatic system, and extravasate the bloodstream to land in foreign tissues, which provide a ‘congenial soil’ (the metastatic microenvironment) for ‘seeds’ (cancer cells) (3). They then begin to colonize ‘the congenial soil’, which supports cancer cell survival and outgrowth, accompanied by metabolic adaptation. However, how metastatic cancer cells survive and proliferate in the LNs remains poorly understood. In their recent publication, Lee et al. addressed this question and discovered that tumor cells that metastasize to LNs require YAP-dependent metabolic reprogramming to adapt to the new microenvironment (1).

Cancer cells have unique metabolic features (4). In general, non-cancer cells critically rely on mitochondrial oxidative phosphorylation of reducing equivalents derived from various energy sources, including lipids, glucose, amino acids, and ketone bodies, to generate ATP. On the other hand, cancer cells preferentially utilize cytosolic glycolysis to generate ATP, to provide cells with the intermediates needed for biosynthetic pathways, even under normoxic conditions, termed aerobic glycolysis or the Warburg effect (5). In addition, cancer cells have remarkable flexibility to strategically undergo metabolic reprogramming during the course of development in order to maintain bioenergetics and biosynthesis, according to the microenvironment in which they reside and the availability of nutrients therein (6). The ability of cancer cells to modulate their metabolism appears to be of particular importance during metastasis, allowing them to adapt to new environments. Increasing lines of evidence suggest that metastatic cancer cells and invasive cancer cells upregulate FAO to support their proliferative capacity (7). Currently, however, the signaling mechanisms through which metastatic cancer cells undergo metabolic remodeling are poorly understood.

Using comparative transcriptomics and metabolomics analysis, Lee et al. demonstrated that B16F10 melanoma cells from micrometastatic and macrometastatic tumor-draining LNs exhibit significant alterations in lipid metabolism, such as bile acid metabolism, fatty acid metabolism, cholesterol homeostasis, and oxidative phosphorylation, and that there is a greater accumulation of fatty acids in LN metastasized tumors than in primary tumors (1). Moreover, the LN metastasized tumors preferentially rely on FAO over glucose or glutamine oxidation as the major mechanism by which ATP is generated. Administration of etomoxir, an inhibitor of FAO, markedly suppressed LN metastasis without affecting primary tumor or tumor-draining LN size, or blood-borne metastasis to the lungs. These findings indicate that a metabolic shift to FAO is essential for metastatic tumors to survive and expand in the LNs. Although the authors do not provide mechanistic insights into how FAO contributes to LN metastasis, abundant production of ATP through FAO may be advantageous for cell proliferation, motility and invasion, key functions of metastatic cancer cells. For example, downstream metabolic intermediates and signaling mechanisms of FAO may affect survival and death through anoikis (8), as well as cell fate, such as epithelial mesenchymal transformation (9).

This raises the important question of how this metabolic remodeling is achieved in LNs. In this study, the authors showed that YAP, which is a major downstream effector of the Hippo signaling pathway, is activated in the cancer cells at the invasive front of LN-metastatic tumors, but not in primary tumors. Furthermore, knockdown of YAP attenuated FAO in LN-metastatic tumors without affecting glucose or glutamine oxidation (1). The authors also showed that YAP deletion markedly inhibited LN metastasis without changing the size of the primary tumor or LN, consistent with the effect of inhibition of FAO on LN metastasis. These results suggest that YAP promotes LN metastatic tumors through upregulation of FAO (Figure 1). 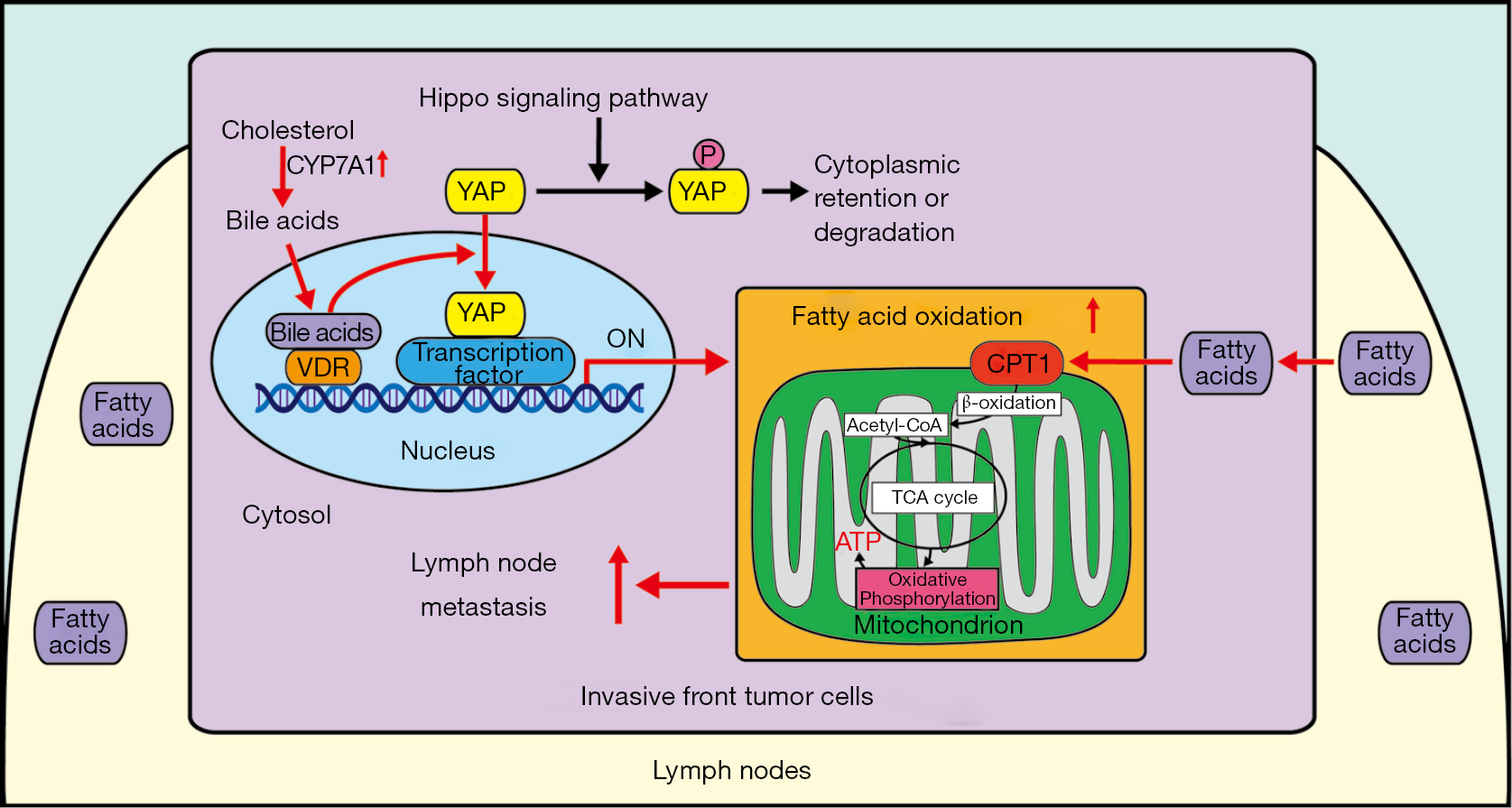 Lee et al. elegantly demonstrated that cancer cells activate YAP after they arrive at LNs, in response to the local environment (1). Both metabolomic and transcriptomic analyses revealed that bile acids are markedly elevated in LN-metastatic tumors. The authors confirmed that bile acids activate YAP in the LN-metastatic tumors and found that nuclear vitamin D receptor (VDR), one of the bile acid-activated receptors, likely mediates bile acid-induced YAP activation. It should be noted, however, that what triggers bile acid production in LN-metastatic tumors remains to be elucidated. Furthermore, in human hepatocytes, the VDR-signaling pathway acts as a negative feedback mechanism to suppress bile acid synthesis through downregulation of CYP7A1 (12). Thus, it would be interesting to investigate whether bile acid synthesis in the LN-metastatic tumors is sustainable. Although previous studies have shown that bile acids activate YAP through activation of either sphingosine 1-phosphate receptor 2 (13) or induction of IQGAP1, a scaffold protein (14), how the bile acids-VDR pathway affects the Hippo pathway and YAP in local LNs remains to be clarified.

Regardless of the open questions, perhaps one of the most crucial discoveries in the work by Lee et al. is that YAP confers metabolic flexibility to metastatic cancer cells. What, then, is the underlying mechanism through which YAP mediates the metabolic reprogramming in metastatic cancer cells? Because YAP is a transcriptional cofactor that lacks DNA-binding activity, it regulates gene expression through interaction with transcription factors. The TEAD family transcription factors are among the best characterized transcription factors mediating the function of YAP/TAZ through expression of genes promoting cell survival, proliferation, and metabolism (10). Interaction between YAP and TEADs may be involved in the regulation of tumor metastasis to LNs since the TEAD-interaction domain of YAP is essential for YAP-mediated tumor growth and metastasis in mammary carcinoma and melanoma (15). However, since YAP mediates the Warburg effect in primary cancer cells, it remains to be determined how YAP can mediate glycolysis under some conditions but stimulate FAO under other conditions. Although these metabolic conditions are not necessarily mutually exclusive, it appears that YAP selectively modulates FAO in metastatic cancer cells (1). This appears reasonable from a metabolic standpoint; since fatty acids are abundant in LNs and more ATP can be produced using fatty acids as a substrate, upregulation of FAO would be beneficial for survival, growth and invasion of metastatic cancer cells. Then how do cells decide whether to activate glycolysis or FAO? Since, in addition to TEAD, YAP interacts with multiple transcription factors, including FOXO1, HIF1α/β, KLF5, C/EBPα, and PPARγ (10), it is possible that YAP stimulates either glycolysis or FAO depending upon the availability of active transcription factors in the nucleus, which could be cell type-specific or affected by post-translational modification of transcription factors through upstream signaling mechanisms. Interestingly, gene set enrichment analyses suggest that the PPARα signaling pathway is activated in LN-metastatic cancer cells (1), and a previous study showed that bile acids upregulate PPARα in hepatoma HepG2 cells (16). Thus, it is tempting to speculate that YAP promotes FAO through interaction with PPARα. Since PPARα positively regulates bile acid synthesis (17), it is possible that bile acids, YAP, and PPARα may form an autocrine positive feedback mechanism to facilitate adaptation and spreading of metastatic cancer cells in the local environment of LNs. It is unclear whether elevated bile acids alone are sufficient to achieve activation of downstream transcription factor(s) to upregulate FAO or whether additional stimuli are necessary. Further investigation is needed to clarify the signaling mechanisms controlling tumor metastasis to LNs.

In summary, the study by Lee et al. shows that the bile acids-YAP pathway mediates metabolic flexibility, which confers adaptivity to the local environment and boosts the metastatic ability of cancer cells in local LNs (Figure 1) (1). The authors’ findings suggest that inhibition of YAP or FAO may represent a new therapeutic target to prevent survival and growth of metastatic cancer cells in LNs. Alternatively, an intervention to locally prevent activation of YAP in LNs may also be effective. Further investigation is warranted to clarify the mechanism by which YAP is regulated locally and how increased FAO affects downstream cellular function in metastatic cancer cells so that more therapeutic options for the attenuation of tumor metastasis may be identified.

Funding: This work was supported in part by U.S. Public Health Service Grants HL67724, HL91469, HL112330, HL138720, and AG23039 (J Sadoshima), and by the Foundation of Leducq Transatlantic Network of Excellence 15CBD04 (J Sadoshima). T Kashihara has been supported by a Postdoctoral Fellowship from the Uehara Memorial Foundation.